To celebrate our range of Hokusai printed furoshiki, we’d like to talk about the tremendous impression that his woodblock prints (ukiyo-e), and the woodblock prints of other Japanese artists, had on contemporary painters in Europe.

Our furoshiki range includes three of Hokusai’s beloved prints, and they create beautiful home decoration such as wall hangings and tableware, as well as beautiful furoshiki bags and gift-wrapping: 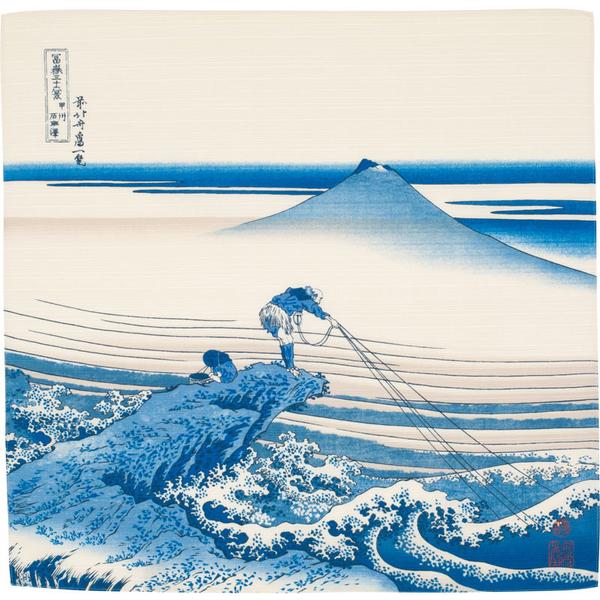 Hokusai created the Thirty Six Views of Mount Fuji owing to his fascination with the iconic mountain. The two prints which feature on our large 104cm furoshiki – The Great Wave off Kanagawa, and South Wind, Clear Sky, are the most clearly recognisable of the series, and it was these works that secured Hokusai’s reputation as an internationally acclaimed artist.

Hokusai’s career ended just before the historic opening-up of Japan to trade in the mid-19th century. For over 200 years, Japan exercised a strict seclusion policy (sakoku), which forbade exit from and entry into the country, and also trade. Only the Netherlands had a small window of opportunity down in Nagasaki, owing to the trading of the Dutch Company of the East Indies. The small man-made island of Dejima was allowed to support a community of Dutch people. They were Japan’s window onto the world.

In 1853, Commodore Perry approached the bay of Edo with a fleet of steam-powered warships, bearing a letter from the American President diplomatically requesting, amongst other requests, the opening up of trade across the Pacific. Trade agreements with several western nations eventually followed, and so it was, that with the advent of the new, western-influenced Meiji Emperor in the newly-named capital of Tokyo, that Japanese art and objets such as kimono, silks, and lacquerware, flooded the European market, where they were embraced wholeheartedly.

Great exhibitions were held in Paris and London, where the general public could view the beautiful Japanese art works. Shops sprang up in the Rue de Rivoli in Paris and elsewhere, to supplement the public’s growing passion for japonisme.

And, among some of our most beloved artists of the time, was a growing fascination with the clean, illustrative lines (which were fresh and new compared to Europe’s many-layered paintings of oil and watercolour), and the simple use of colour.

Artists such as Vincent Van Gogh, Edgar Degas, and Claude Monet, were among the many who were greatly inspired by Japanese art; who collected ukiyo-e, and who emulated it in their own art.

The French Impressionists painted quickly en plein air. They captured the fleeting moment in their painted sketches, which is akin to the Japanese Buddhist philosophy (ukiyo) which mourns the beauty in the transience of life. In Japan this is particularly celebrated at hanami – cherry blossom season – when the beauty of the cherry blossom lasts momentarily and soon fades. Later the term came to simply mean ‘the pleasures of life’.

The influence of ukiyo-e can be seen here, in Vincent Van Gogh’s portrait of his dear friend, Pere Tanguy, who owned an art supplies shop on the Rue Clauzel in Paris. Not only is the paint style flat, as in the ukiyo-e style, but the woodblock prints that Van Gogh and his brother Theo collected can be seen behind his friend. Van Gogh’s collection of Japanese art clearly made an impression:

‘After some time your vision changes, you see with a more Japanese eye, you feel colour differently.’

Van Gogh is known to have rummaged for Japanese woodblock prints that had been used as packing paper for porcelain imported from Japan. Monet initially discovered his first ukiyo-e in a similar way.

He had been unsuccessfully trying to haggle over the cost of a china jar:

‘I had the good fortune to discover a batch of prints at a Dutch merchant’s. It was in Amsterdam in a shop of Delft porcelain.’

‘Suddenly I saw a dish filled with images below on a shelf. I stepped forward: Japanese woodblocks!’

The shopkeeper allowed Monet to have the woodblock prints included in the price of the china jar.

Monet began collecting ukiyo-e in the 1860’s, and he continued to collect them for the next three decades. You can take a virtual tour of his beautiful house at Giverny here, and you can see many Japanese woodblock prints on the walls!

Monet at home at Giverny surrounded by his ukiyo-e, (www.intermonet.com/japan/).

Monet owned 23 prints by Hokusai Katsushika, 48 by Hiroshige Utagawa, and 46 by Utamaro Kitagawa. In the wonderful photo you can see Monet standing in his beautiful kitchen in Giverny, with many of his Japanese prints behind him on the wall. His house was full of them, and the influence that they lent to his art and to his garden is evident in the iris beds; the water garden and the lilies; and the Japanese-style bridge. Even though Monet never visited Japan, he surrounded himself with its art and its influence. It is clearly seen by comparing the work of Monet and Hokusai below: the composition of Monet’s bridge at Giverny is very similar to the clear, linear style of Hokusai.

The Japanese merchant, Hayachi Tadamasa, made a significant impression on Monet, too. He imported thousands of ukiyo-e from Yokohama to Paris, and made several visits to Monet at his home in Giverny. They exchanged paintings, too. In 1893, Hayashi organised the first Impressionists exhibition in Tokyo, and there has been mutual admiration for the respective artwork ever since!

Yukki introduced me to Monet’s painting La Japonaise. It was painted in 1857, which was right at the heart of the moment when the West was creating trade agreements with Japan, and when Japanese art was sweeping into Europe. It is a comment on the contemporary passion in Paris for all things Japanese, and accordingly, Mme. Monet is swept up in delight as she wears the vibrant kimono, and the randomly placed sensu give the impression that they are raining down behind her!

Genevieve AITKEN and Marianne DELAFOND, The Collection of Japanese Prints of C. Monet

About Nishijin-ori: a Kyoto Textile